According to the editor, Jide Badmus;

“The decision to call for submissions for this anthology was made after a promising young writer died. It was a suicide. A couple of months after, one of my daughters in the literary world made an attempt to end it all. A few weeks after that, I got a suicide note delivered as an early  morning text; another promising writer took her own life.

“It was as if suicide was a writer’s issue. Depression seemed to be the writer’s bane. It was becoming a thing young writers were getting obsessed with too. Mental health issues were becoming trivialized. Some felt it was a trend to jump on.

This anthology is a manual of survival—testimonies of those who have known pain and joy. It is a catalogue of battles and hard-won victories. It is an album of long nights, storms and sunshine. 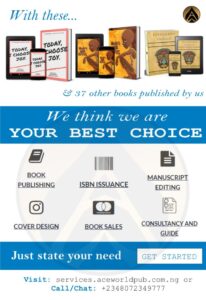