Dangote Cement took its joy spreading promo to Ikorodu in Lagos State, Nigeria’s commercial and financial capital, where it alerted 11 winners that it was carrying N11 million to share to them in the tune of N1 million each, essentially announcing them as new millionaires for patronizing the company’s cement product.

The new millionaires received dummy cheques and instant credit alerts as their star prizes in the ongoing Dangote Cement Bag of goodies season 2 promo, at a ceremony where they were physically present.

The company in a statement made available to Business A.M. said the new millionaires comprise block makers, bricklayers, labourers, building contractors and tilers, an indication, it said, that artisans in the building industry are emerging as winners on a daily basis.

Victor Amaa, a tiler and one of the winners, commended the management of Dangote Cement for creating the promo which has turned many artisans into millionaires. According to him, he has been using Dangote Cement in his work for many years and always recommend the brand to his customers. Amaa explained that he picked and stored the cards as he opened bags of cement in the course of his job. 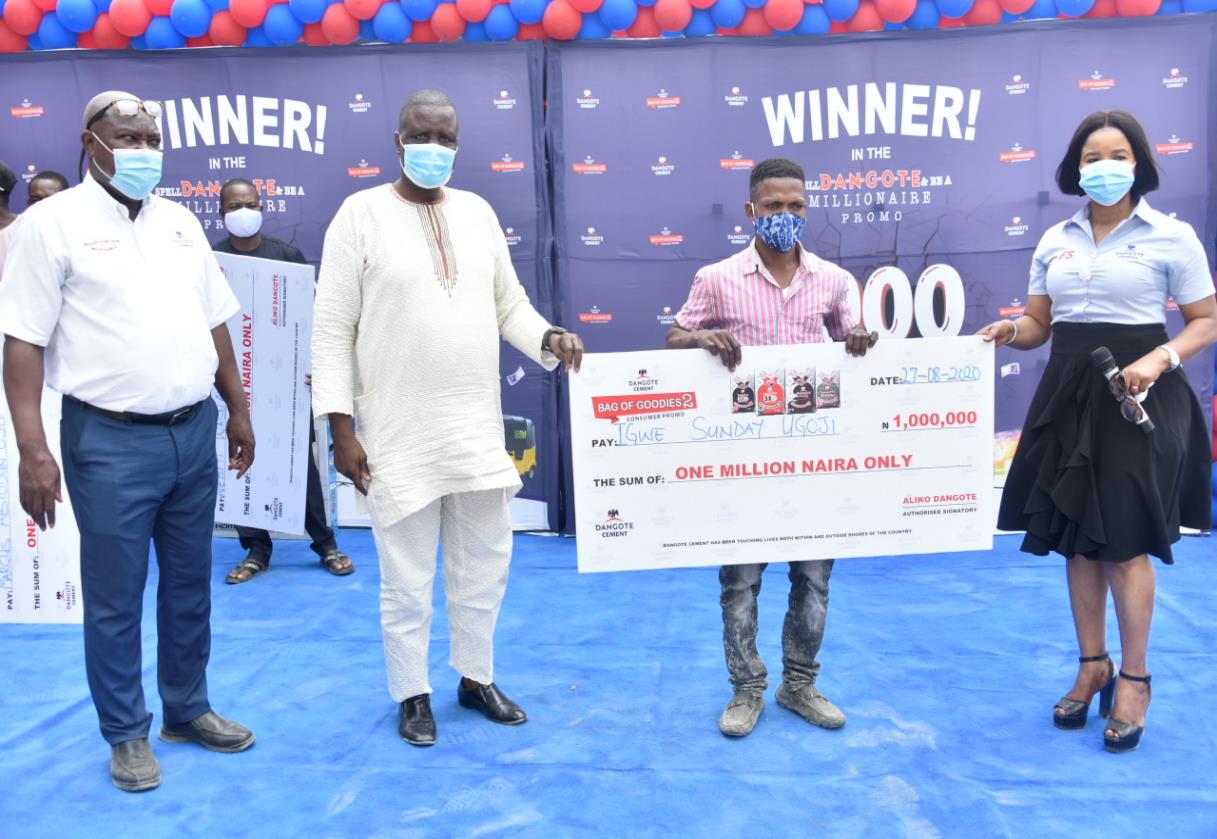 For building contractor Thaddeus Ohadiro, the star prize of N1 million comes as an incentive to continue to use the product in his work, adding that Dangote Cement is of good quality and suitable for all construction works. He commended the management of the cement company for the transparent nature of the promo where the winners receive the actual prizes as stated in the posters and announcements.

Tunde Mabogunje, regional sales director, Lagos/Ogun, Dangote Cement Plc,  noted that the promo is one of the biggest and most impactful in the Nigerian economy given that 1,000 winners will receive one million each. The star prize he said, is enough to kick start a business that will change the economic standards of the winners. He explained that one thousand Nigerian families would have been lifted out of poverty when the promo is concluded.

Funmi Sanni, marketing director, Dangote Cement Plc, said the promo was meant to reward its teeming customers who had with their patronage made Dangote cement number one product in the country. She stated that there was no better way to show appreciation to them than the cash reward in view of the present situation.Sanni insisted that consumers are entitled to multiple times winning in the ongoing promo. “The beautiful thing about the promo is that the new Dangote Cement millionaires can win again and win. There is no limit to the number of times they are expected to win. So my advice is that they should keep on buying Dangote Cement and keep on winning,” she said.

Aside winning N1 million, Sanni said that consumers also stand a chance to win tricycles, motorcycles, television sets, refrigerators, Dangote Food Goodies packs, recharge cards and many other exciting gifts.To be a part of the promotion, she explained, “all the consumer needs to do is to buy any promo bag of Dangote Cement during promo period, pick out the scratch card inserted in the bag, scratch open the inserted card to see what you have won, and go to the nearest redemption center to collect your prize.”