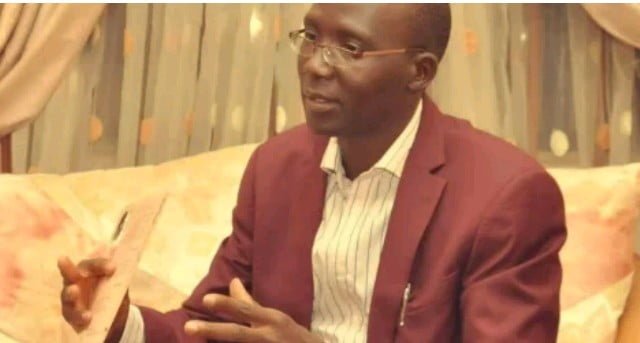 On the 12th of July, 2019, Daily Nigerian published Ahmed Maiwada‘s declaration for Associasion of Nigeria Author presidency. In the statement, Maiwada emphasized the need to restore the glory and Goodwill of ANA.

A lot has happened over the past few months, most of which recorded deficient conduct and representation of the principal literary association. It’s now upon us to do what is right to ensure the change we vouch for comes into actualization.

In this interview session, ACEworld editor, Taiyewo Fawole engaged Ahmed Maiwada on his plans for Nigerian writers and the association in general.

T.F: It’s really an honour and a source of delight to have you with us this morning. Also, ACEworld as a team appreciates you for this opportunity.

Maiwada: It’s my singular honour to be had by you this morning. I’m grateful.

T.F: Without further ado, can we meet you?

Maiwada: Actually, there is a great volume about me online in interviews I’ve granted over the years that I think it might not be okay to take up your side with the same information.

T.F: All right. So, I’ll launch directly to the purpose of the interview. We understand that you are vying for the presidency of ANA. What is the motivation behind this and do you not think that combining this office and your legal profession not affect your productivity if elected?

Maiwada: Yes, I am vying for the office of the President of the Registered Trustees of the Association of Nigerian Authors. There is a lot on my motivation that came from some well-meaning members of the association wishing me to serve, knowing me for several years and observing that I could be suitable for the office. I was contacted by such people right from the moment I turned my back from the association’s convention that held in Lagos, where many were disgruntled by the reception they received from the organisers of the event that turned out more like a funeral rather than a celebration of literature and authors. And, I had turned down those calls ever since then, until I was convicted, after observing that the candidates vying for the office of President are not suitable materials for the said office, that staying out of the race is similar to throwing our dear association out to the wrong managers, and doing so at this critical point of our history could amount to a serious disservice to ANA. That’s why I am on record as the last candidate to declare for the office of President of ANA. It is a step by me out of my comfort zone and into the fray, for no other reason than to fill in the leadership vacuum that I am very sure the other three candidates cannot fill at this very moment. Wouldn’t my legal practice affect my productivity as ANA President? Well, I am going to run a constitutional government, which means: serve in accordance with the specific provisions of our Constitution. This, for a start, shall be a new thing, because until now, it’s been one unconstitutional beach or the other by those in leadership who neither know the Constitution nor have the humility to seek for interpretation of their actions as against the constitutional provisions. By running ANA constitutionally, it means I, as President, wouldn’t usurp the powers of any other office in the executive council, and that I would allow everybody rejected into one office or another to function within his mandate as prescribed by the Constitution. Therefore, doing this alone would guarantee me enough time to concentrate on my duties as President only, thereby safeguarding my being overworked. That means I’d have time for my legal practice. Secondly, I live and practice in Abuja, as head of the chambers. It means that I am not the only lawyer in the chambers. As it happens now, that I don’t attend to all cases personally, so shall it continue when I am President. However, there is a great advantage that I have over all other Presidential candidates, in being an Abuja resident: I am close to almost everybody and everything of relevance to ANA, and I am centrally located. The ANA land is here, and it’s a property that shall require a very close supervision. You can’t manage even a self-contained property from afar, not to mention an investment of course to N2b, comprising of hotel rooms, halls, a conference centre and so on. You need not only to be on ground, but also grounded in property management, which has been a part of my business. Finally, service is a second nature to me. I consider being President of ANA as a service I’d render to the good members of the association. It’s therefore just a natural extension of what I’ve always been, and therefore shall have no negative impact on my productivity at all.

T.F: ACEworld would like to know; what are your visions, missions, and agenda for Nigerian writing? What do members of the association stand to profit from your administration if elected?

Maiwada: The full programmes of my Executive Council shall be made public very soon. However, I’ve summarised them in my declaration speech, which has been extensively published: recover of lost ANA land, of lost ANA goodwill/image and of lost ANA members.

T.F: Association of Nigerian Authors is one that has members across the 6 geopolitical zones of Nigeria. With this in mind, how do you plan on making policies that won’t be perceived as favouring a group or region to the neglect and detriment of other regions, especially at a time like this that Nigerians are more sensitive to cultural and religious differences?

Maiwada: Association of Nigerian Authors isn’t structured like the Nigerian State. We have Chapters at the Nigerian State level and Chaplets at the Nigerian Local Government level. It might interest people to know that membership of those Chapters or Chaplets doesn’t depend on one being an indigene of a State or Local Government where a Chapter or Chaplet is. That is why over the years we could have an Igbo from Anambra State as Chairman of Yobe State Chapter, or an indigene of Niger Delta as Chairman of Abuja Chapter, etc. As for sharing of resources, we have an existing policy of ANA, whereby the Chapters and Chaplets are the ones that feed the National body, instead of the other way round. We don’t have oil resources at our disposal to share. However, it is my hope to reverse this trend, by cultivating ANA’s investments and renewed goodwill to generate the resources to feed the Chapters and its members. Now, the structure of ANA being what it is, there is no way one could afford to favour one Chapter over the other in order to benefit one’s ethnic group, because our membership isn’t ethnically cohesive. It’s always a mixture of the entire country.

Maiwada: I have been privileged to participate in copyright related events and celebrations on the past, as a writer and publisher writing and publishing in Nigeria. I have participated in panel discussions in the studio of NTA, where I contributed my own quota regarding how copyright of writers could be protected. In summary, I have said that the structures key to prosecution of violators of copyright in Nigeria must be enhanced and equipped. That is the duty of the government, and not that of ANA. However, I would be ready to partner with the relevant authorities towards amending the Copyright Act in such a way that enforcing penalties on violators would be smooth and swift. Beyond that, ANA doesn’t have any power to influence things.

Maiwada: Government policies towards printing materials has always been harsh. Cost of printing books in Nigeria remains ever spiraling, making it difficult or impossible for the Nigerian readership to afford Nigerian books displayed out there on the shelves. Therefore, I would do my utmost to call the attention of government towards bringing down the costs of paper and other printing materials. I would also like to see the government of the day, by means of its relevant agencies, purchasing at least a thousand copies of any literary title by a member of ANA, which shall have been published by the process of conventional publishing. This way, both the Nigerian publisher should be encouraged to invest in the Nigerian author’s works that are good enough for the reading public, since the government would have guaranteed the sale of at least a thousand copies.

Maiwada: A writer published is a writer with a voice. In addition to encouraging the mainstream Nigerian publisher into publishing ANA members, as a result of the government policies I have spoken about earlier on, my Executive Council purposes to publish association’s journal called ANA Review, quarterly, rather than the current annual publication of the said journal. There is no discrimination concerning who might get published. Therefore, the younger Nigerian writer who is a member of ANA shall surely see his or her works in print in those quarterly publications, which shall be widely circulated. I am also of the view that the resources of ANA must be used in developing the skills of younger ANA members. There shall be exchange programmes with some European universities which young ANA members shall benefit, as well as ANA residency, which shall be on the ANA land at Maitama Extension here in Abuja. Finally, the finished products from these young members, together with those of older ANA members, shall have a pride of place on the shelves of our members-only bookshop at the ANA land, where a policy of giving returns to the said members shall govern, better than what any other bookshop in Nigeria is giving it’s authors.

T.F: Lastly, how do you hope to represent Nigerian literature internationally apart from that which you mentioned earlier as part of your plans for the youths?

Maiwada: I think every writer that writes wishes to represent himself first; to present his thoughts, ideas, stories, etc, to his or her audiences. The writer should have done his work well if he concentrates on making the best of opportunities that come his way. Therefore, I wouldn’t want any writer to worry about representing his country in his writing, that is naturally built into the representation of the self. However, as an association of authors, we hope to make a model writers’ haven of the Mamman Vatsa Writers’ Village which we have to our name. We expect that our hotel and other facilities on the land should be patronised by members of the expatriate communities in Abuja and the rest of the country. Ours shall be a tourist piece. Therefore, the representation to the world shall start there. For once, the Nigerian authors shall provide a soul for the City of Abuja, bubbling with cultural contents such as dramas, dances, poetry performances, book and art exhibitions and the like. As far as our investment in Abuja goes, we hope to have businesses that are interconnected, with a view to satisfying revert visitor uptimally in such a manner that our success story shall be told in all corners of the earth.

T.F: Wow! Thank you very much for the quality time spent with us today. The entire ACEworld team appreciates you.

Maiwada: I’m elated by the opportunity. Be blessed.

Taiyewo Fawole is a writer, poet and student of Philosophy at Obafemi Awolowo University, Ile-Ife. He’s the author of an about to be released play, In Piece, In Peace.