Beyond Aesthetics, a forthcoming book from the Nobel Laureate, Wole Soyinka uses, Abuse, and Dissonance in African Art Traditions. It draws on the author’s experience as a longtime art collector to explore identities, traditions, and originality in the making, collection, and exhibition of African art, widening into a reflection on aesthetics.

The 144-page book will be published on 12 November 2019, by Yale University Press, in association with Harvard’s Hutchins Center for African & African American Research, with the hardcover edition set for release on 14 January 2020. 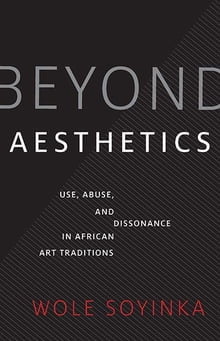 According to the publisher;

“An intimate reflection on culture and tradition, creativity and power, that draws on a lifetime’s commitment to aesthetic encounter

The playwright, poet, essayist, novelist, and Nobel Laureate Wole Soyinka is also a longtime art collector. This book of essays offers a glimpse into the motivations of the collector, as well as a highly personal look at the politics of aesthetics and collecting. Detailing moments of first encounter with objects that drew him in and continue to affect him, Soyinka describes a world of mortals, muses, and deities that imbue the artworks with history and meaning.

Beyond Aesthetics is a passionate discussion of the role of identity, tradition, and originality in making, collecting, and exhibiting African art today. Soyinka considers objects that have stirred controversy, and he decries dogmatic efforts—whether colonial or religious—to suppress Africa’s artistic traditions. By turns poetic, provocative, and humorous, Soyinka affirms the power of collecting to reclaim tradition. He urges African artists, filmmakers, collectors, and curators to engage with their aesthetic and cultural histories.”